When I was a child, I wanted to control the world because as an adoptee, I felt like I had no control. Children play to control the world. Tiny themselves, they create even smaller worlds populated by all sorts of figures, friends to have tea with, monsters to defeat, new microcosms to explore what is inside them via the outside world.

As an adopted child, I created dioramas hardly understanding the worlds I was creating for myself, worlds into which I might disappear for an afternoon.

At 29, I learned that my birthmother became pregnant with me and had been sent away to a home for unwed mothers—The Guild of the Infant Saviour, in Manhattan—I realized we had more in common than just the circumstance of my birth: we both had disappeared inside fantasy worlds. Mine was tiny, imaginary, and voluntary; hers was all too real.

I began The Dollhouse to explore my personal history as well as to interrogate the ideas of adoption, identity, feminism, and home. Creating worlds through play in The Dollhouse allows me to create utopias where women rule the 1:12-scale world. Dolls and dollhouses represent a hyper-sexualized way of thinking about women. I wanted to explore this Madonna/Whore tension. I wanted to populate my 1960s-era Louis Marx “tin mansion” with images of women from the era of my mother’s confinement, to imagine myself into her life, and imagine her into mine. By disrupting the patriarchal fixtures of the time, I explore what has changed, and what remains.

Play has helped me unlock new ways of expressing the paradox of my identity as an adoptee, while exploring memory, trauma, erasure, and the myths and family lore that so heavily factor into adoptees’ origin stories.

I’m at work on a hybrid memoir-in-essays titled, The Guild of the Infant Saviour. Part social history, part memoir, the collection examines motherhood, nature/nurture, shame, identity, and the transformation of New York City through my lens as an adoptee, through images from The Dollhouse, and through stories my birthmother told her. 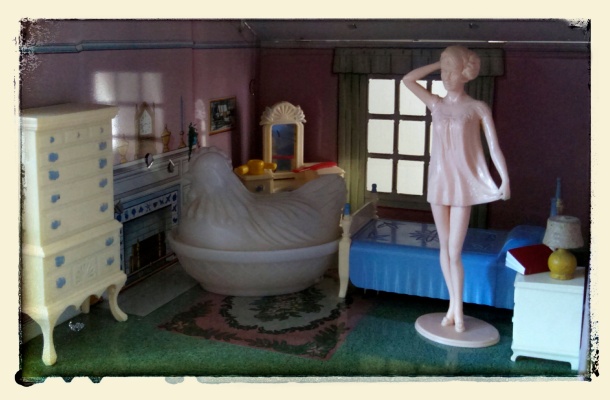 When it came to intimacy, she had to admit that she was a big chicken.

“Oh, hello,” she said. “Are you the mediocre white man whose confidence everyone seems to be talking about?”  – props to Sarah Hagi (@geekylonglegs)

She only served her family Trump brand breakfast sausage fingers 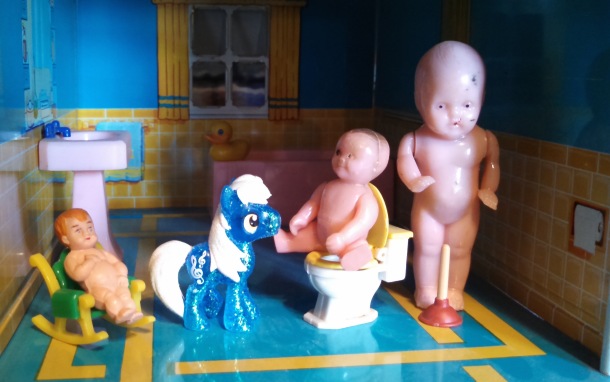